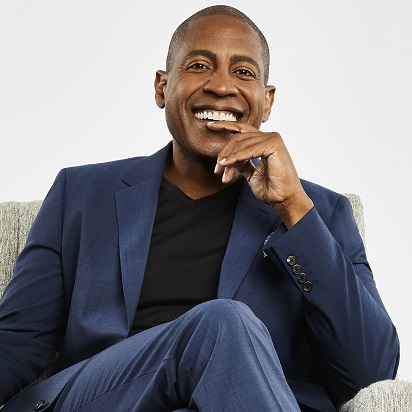 Entrepreneur and multi-Emmy-winning journalist and TV show host Carlos Watson is the co-
founder and CEO of OZY, a multi-platform media company that aims to help curious people see
a broader and bolder world.

As an interviewer, Watson has earned praise for his ability to get high-profile guests to open up
about a wide range of topics on camera. Throughout his career he has interviewed everyone
from world leaders (such as George W. Bush, Barack Obama and Tony Blair) and leading
politicos (such as Condoleezza Rice and Hillary Clinton) to business leaders (such as Bill Gates
and Mark Cuban), public intellectuals (Ta-Nehisi Coates and Malcolm Gladwell) and figures
from sports and popular culture (including Alex Rodriguez, Naomi Campbell and John Legend).
Watson is the host of The Carlos Watson Show, hailed as the fastest-growing talk show in
YouTube history, which has featured guests such as Padma Lakshmi, Tomi Lahren, Pete
Buttigieg, Baker Mayfield, Gabrielle Union and Caitlyn Jenner.

A son and grandson of teachers, Watson brings a unique perspective given his journey from
growing up as one of four Black kids in a humble household on the outskirts of Miami to
becoming one of the most prominent leaders of color in the US media industry. Following the
murder of George Floyd, Watson penned a letter to OZY subscribers announcing his desire to
help “Reset America”, which subsequently went viral and led to the launch of the Carlos Watson
Show, a talk show that has been hailed as having one of the most diverse roster of guests in TV
history.